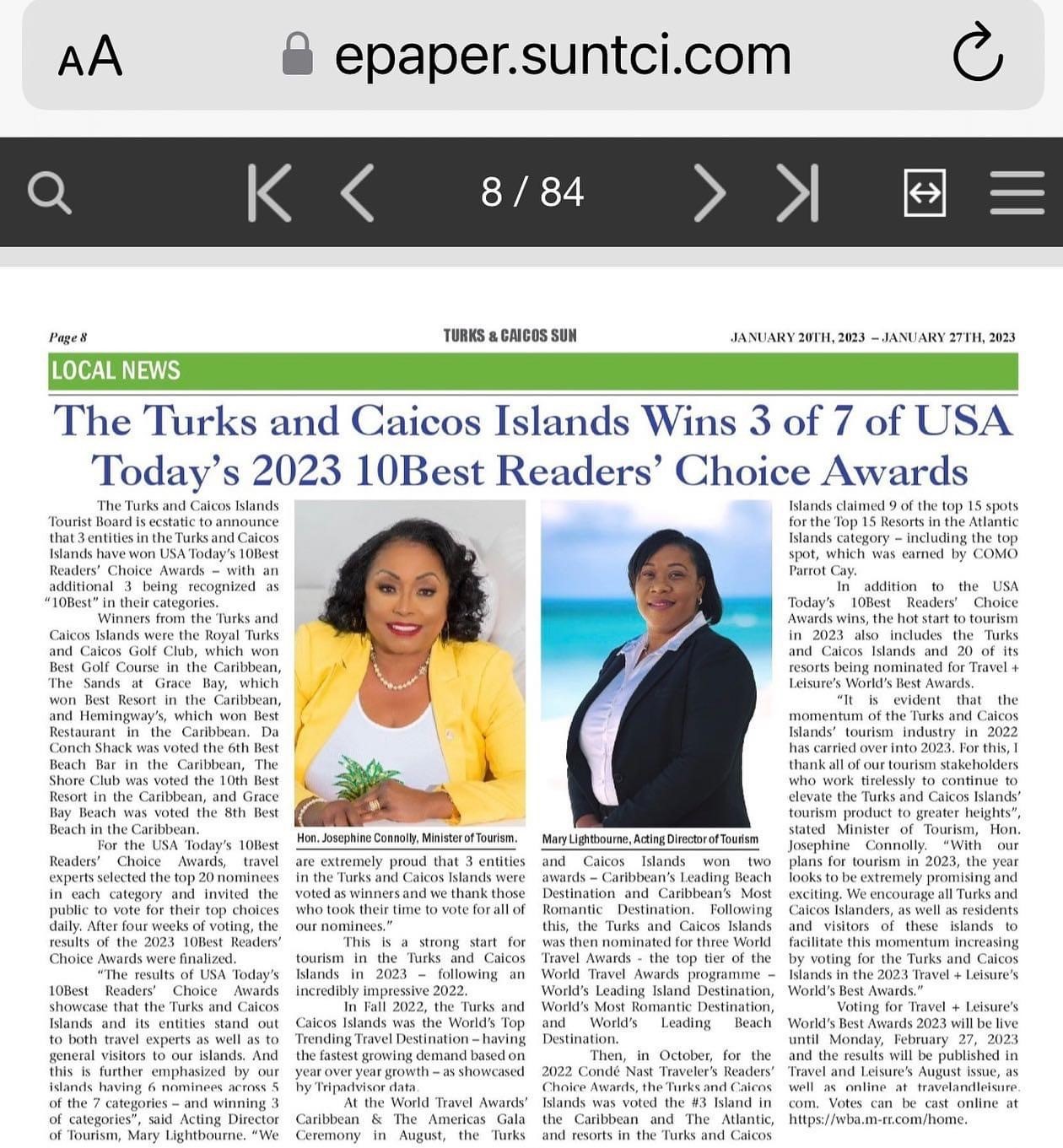 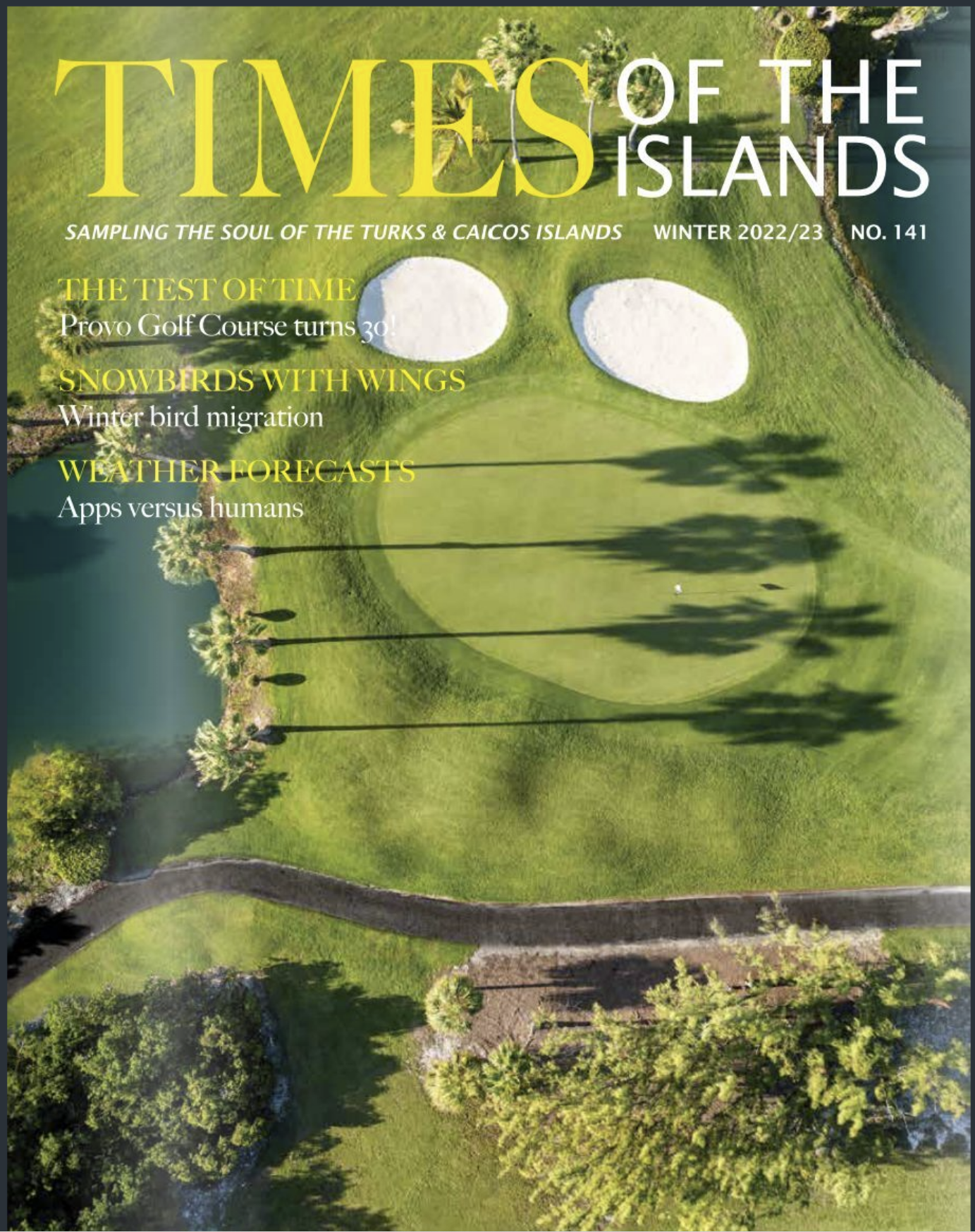 Royal Turks and Caicos Golf Club features in the 2023 Winter edition of Times of the Island. 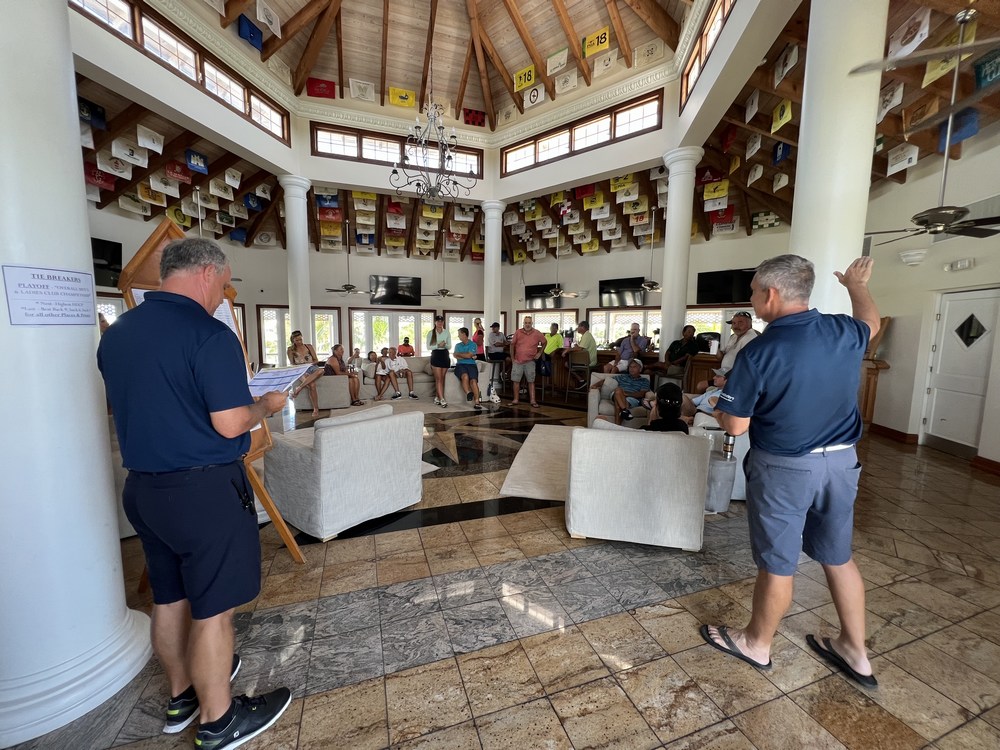 Fifteen-year-old Kurt Rivers shot rounds of 73, 73 for a two-day total of 146 to win the Men’s Club Championship by a narrow two shots over many times past champion Jumphol Srinark. Despite the 52-year difference in their ages they were tied through the first 30 holes of play. Kurt then pulled one shot ahead on the 13th hole and maintained that lead in an exciting duel until his birdie finish on 18 clinched his third straight Men’s Club Championship.

The Ladies Club Championship saw Brooke Rivers set the new course record for women on Saturday with a 67 only to follow it up on Sunday with the new, “NEW” course record 66. Brooke holed out from 90 yards on the 36th hole to win her sixth consecutive club championship in the finest of fashion. Andrea Todd had an excellent championship winning the low gross in the Ladies flight with scores of 78 and 79 while Carol Brown won the low net in the Ladies division.

Jumphol Srinark claimed the Senior Club Championship (golfers 55+) for the eighth time in the last nine years by bettering Rick Sanmiya who shot impressive rounds of 80 and 83. Simon Dobbs, Jamie McAnally, Rick Sanmiya, and Jumphol Srinark all played excellent golf capturing their respective men’s flights and all with convincing scores compared to their flight competitors. Syed Hassan won the best come back on day two by bettering his first day score by nine shots. Captain Ted Bayley organized, competed, and was on hand for the trophy presentations in what was an excellent event all around.

Thank you to the very supportive members led by our Club Captain Ted Bayley, and to The HAB Group for sponsoring the Club Championship. It was a great year! 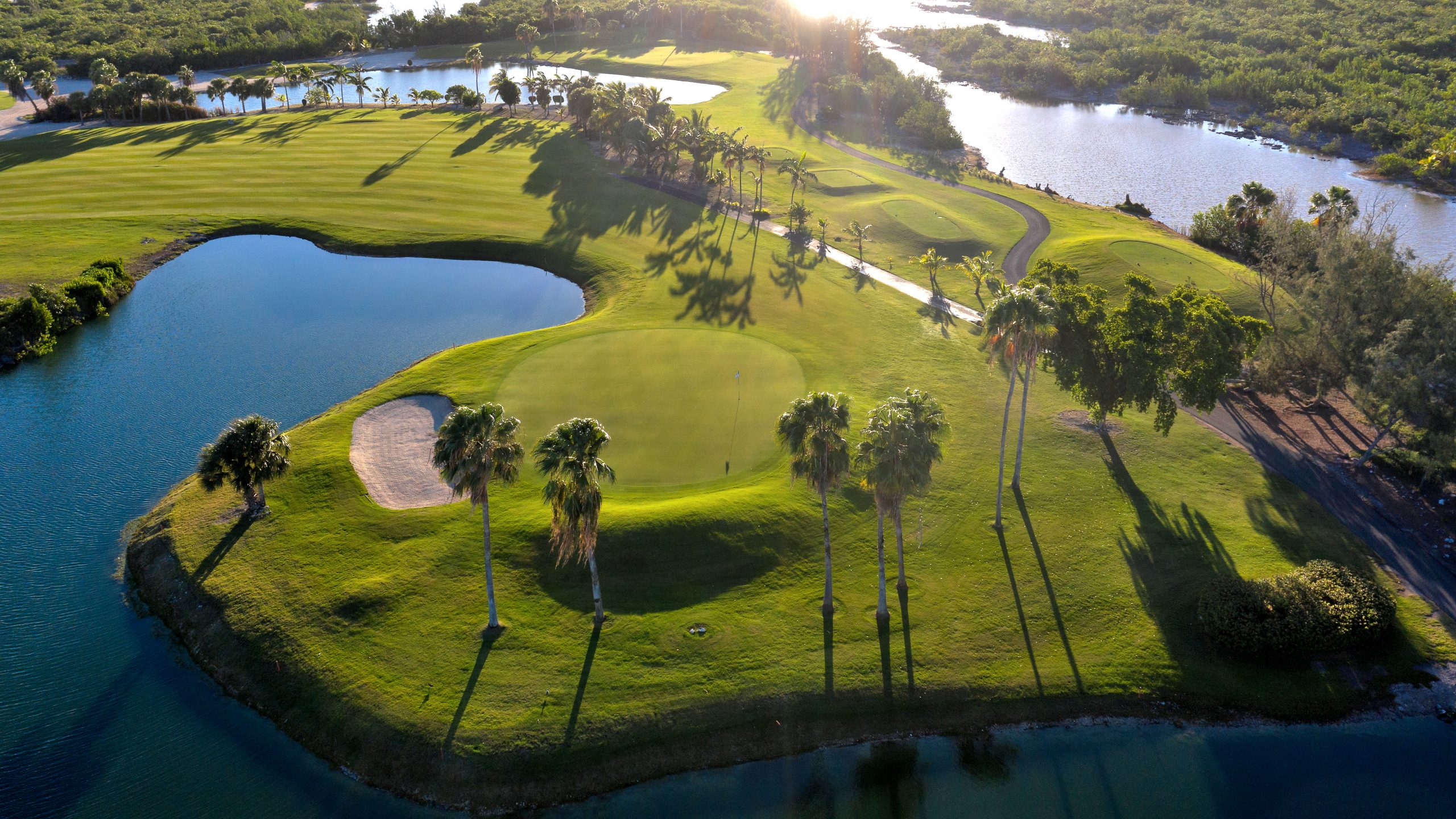 Whether you’ll be island hopping through the Caribbean or basing yourself in a private villa just steps away from a world-class course, this astounding region offers some of the most spectacular golfing experiences in the world. Paired with glorious sunshine and dramatic sea views, you’d be hard-pressed to find anywhere more idyllic to enjoy a round or two. 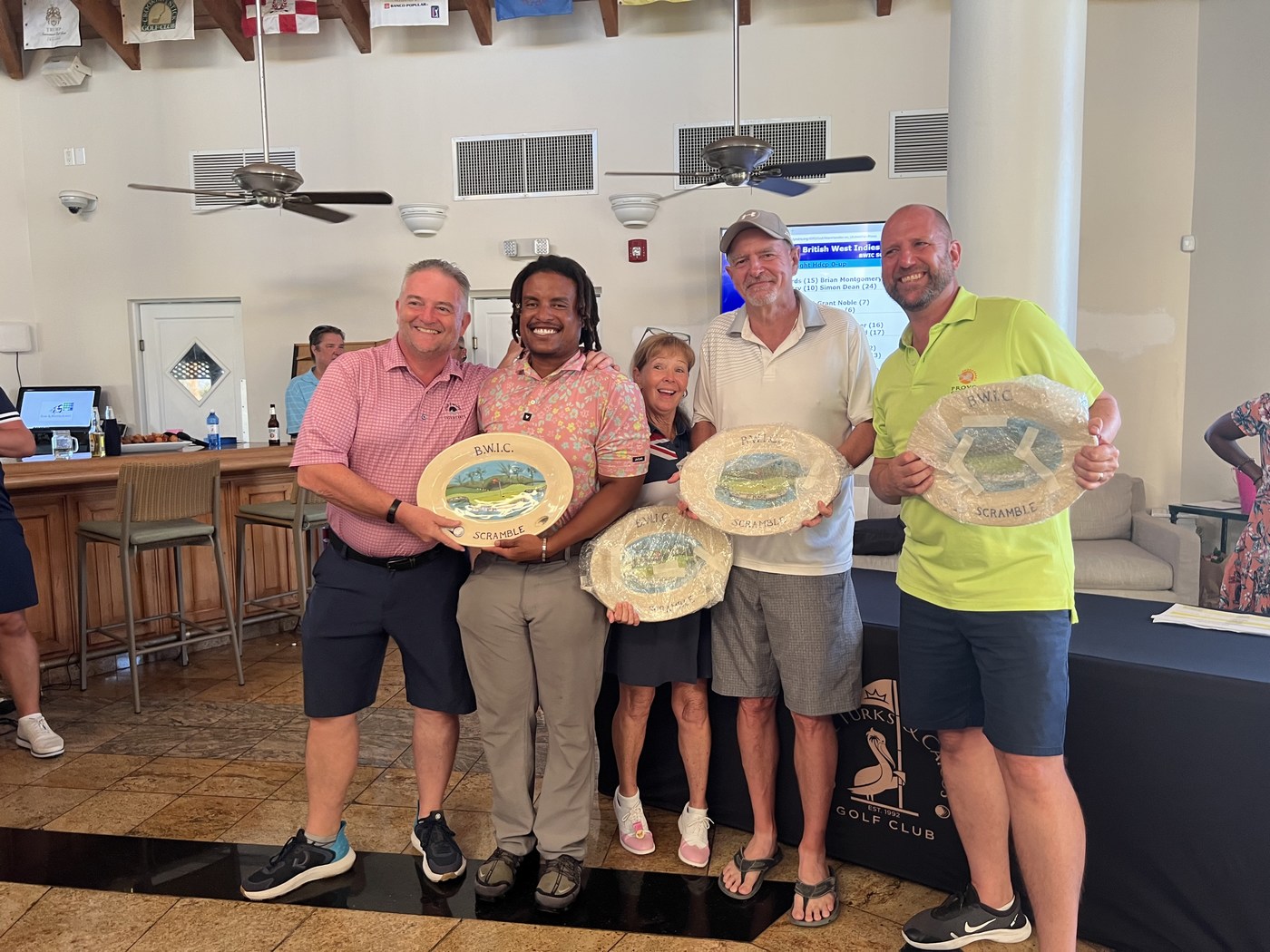 The BWIC Scramble on September 11th was a resounding success as the event raised over $22,000 for their Scholarship/Bursary Fund! Through the overwhelmingly positive response from many island businesses the monies raised moves them one step closer to their goal: “All deserving children, regardless of their financial constraints, will have the opportunity to experience Student Life at the British West Indies Collegiate.”

Hon. Jamell Robinson, a past Collegiate Graduate, was on hand to speak and conduct the prizegiving. The winning team of Adrian Corr, Justin Simons, Mark Harvey, and Steve Ross finished a shot better than the team of Andrew Burke, Richard Parker, Richard Williams, and Robin Tidrick while third place was claimed by Carl Simmons, Perry Delancy, Anthony Walkin, and Ollie Stubbs just a fraction back. Although the scramble is considered competitive the emphasis on fun and fundraising is always foremost. Everyone had a great time! Tournament organizer Collette Coty was delighted with the event, the full field of 80 golfers, and the amazing positive business community support. Thank you to all involved. Collette looks forward to next year’s event with one of her favourite quotes: “Education is the key to unlock the golden door to freedom.” (George Washington Carver) 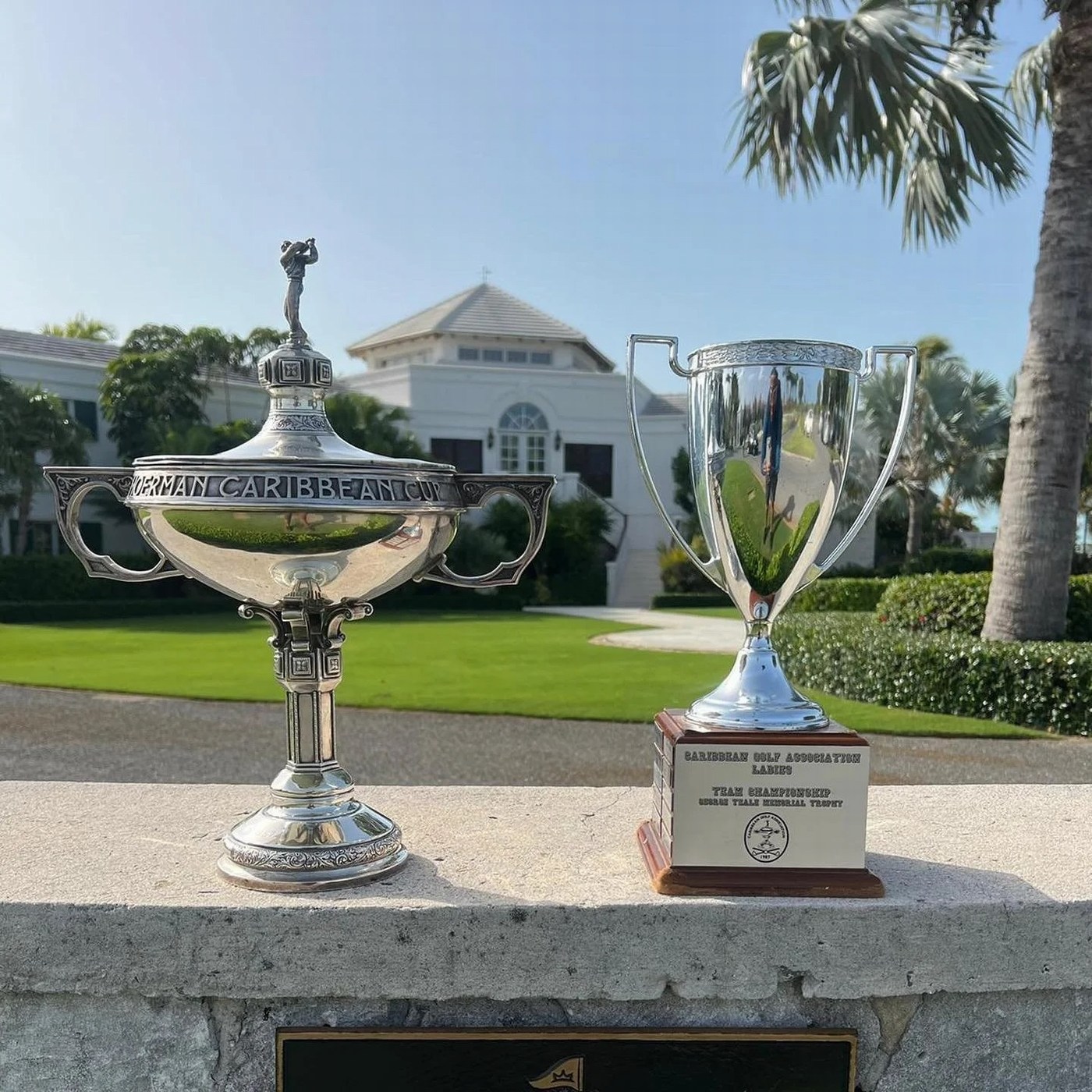 Caribbean Amateur Open Round Up

The course conditions were superb, thank you to the course superintendent, Tim Mack, and his greenkeeping crew who worked diligently during each day and the weeks prior to ready the course for this elite event. The Caribbean Golf Association President, Sydney Wolf from Puerto Rico and the CGA executive team were responsible for the course marking set-up, tournament reporting and officiating. The pin placements provided ample challenges for most competitors and the narrow fairways combined with the prevailing trade winds offered course management encounters for the long ball strikers with the talented players with good course management coming out on top. This annual championship is primarily a team event with the men vying for the coveted Hoerman Cup and the women competing for the George Teale Trophy. With the World Amateur Golf Ranking recognizing this as a major amateur championship, awards are also presented to the top players.
The Proshop Staff, led by Sean Wilson and Dave Douglas, worked hard organizing the golfers and team coaches each day delivering impeccable golf services throughout the week as the team players arrived dressed in daily tournament uniforms and the proud coaches displayed flags on their service golf carts in support of their teams. The Food and Beverage Staff at #19 Bar & Restaurant, led by Paul Slattery and Ronnie Rigby, offered outstanding services throughout the week starting with a delicious Caribbean Buffet for the Opening Ceremony and menu options during the week.

With several months of preparations to organize and manage this event, the TCI Golf Association Tournament Committee along with the dedicated Volunteers were very pleased to watch the Awards Ceremony on August 5th where Puerto Rico successfully defended the Hoerman Cup, and the lovely Jamaican woman’s team captured the George Teale Trophy this year. The individual awards went to Kelvin Hernandez of Puerto Rico who shot stellar rounds of 72, 68, 70 and Holly McLean of Cayman Islands with scores of 75, 72, 73. Team TCI finished the week in 7th place out of the nine competing nations in the Hoerman Cup and 5th place in the George Teale Trophy. In the individual divisions our top player, 15-year-old, Kurt Rivers finished in 14th place and 67-year-old JP Srinark finished in 32nd place out of 50 players. Top TCI woman player, Andrea Todd completed the event in 9th place out of 20 in the woman’s individual division.

Congratulations to all involved, in particular our very generous Sponsors and the R&A, without this combined effort hosting this golf championship would not have been possible. The event culminated with a Sunset Sail send off for the visiting Caribbean nations, sailing across Grace Bay with a chance encounter with our very own JoJo! A beautiful finish to an incredibly successful week by all accounts. 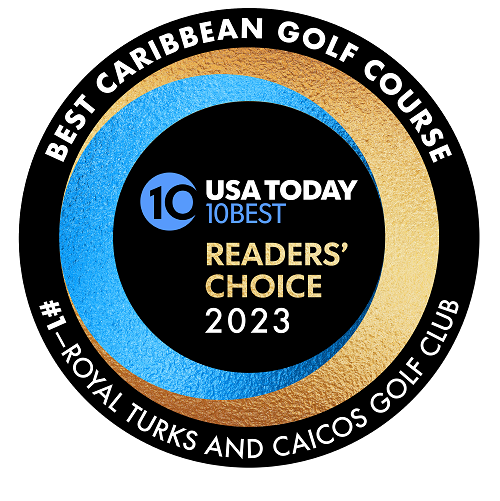 Royal Turks and Caicos Golf Club is delighted to announce it is #1 in the Caribbean as voted by USAToday’s 10Best Top Ten, ranking first among the Caribbean’s 70 courses.

“This successful result was a collective team effort in which we are both honored and overwhelmed,” comments Dave Douglas, Director of Golf;  “Our goal was to be voted #1 in The Caribbean and that dream has come true. The award was made possible through the teamwork of the entire staff which includes the grounds crew who keep Royal Turks and Caicos impeccably maintained, the friendly clubhouse staff who organize each golfer’s day, through to the golf operations team who keep our customers interests as their goal. Together we will celebrate the entire 2023 and would like to thank everyone for their support.”

Royal Turks and Caicos Golf Club has set an impressive history of multi award-winning milestones.  This latest achievement is the fourth year in a row it has collected a “top ten” award and since 1992 has been voted #1 Sports Activity by US News and has numerous Trip Advisor accolades.

This was the fourth nomination for Royal Turks and Caicos Golf Club (formally known as Provo Golf Club)  and competition was tough.  The eventual ranking is as follows:-

10Best is a unique award since no business pays to be listed and independent readers help pick the 10best in any category.  Travel experts select the top twenty nominees in the contest, and it is up to readers to make the final decision by casting their vote.  Royal Turks and Caicos Golf Club promoted voting via Facebook, Instagram and through their following of Turks and Caicos’ residents and Islanders.

The 10Best Readers’ Choice Award contest launched on Monday 21st November when twenty nominees were revealed.  After 4 weeks of voting, the contest closed on Monday 19th December.  Rules allow the public the right to vote online for one nominee per category, per day. All voting is digital and the 10Best Readers’ Choice Award contest is accessible on the 10Best.com website.

Nominees are chosen by a panel of relevant experts which include a combination of editors from USA TODAY; editors from 10Best.com; relevant expert contributors; and sources for both these media and other Gannett properties. The nomination panel for each award category is displayed on its associated contest page.

10Best.com provides users with original, unbiased, and experiential travel content of top attractions, things to see and do, and restaurants for top destinations in the U.S. and around the world. 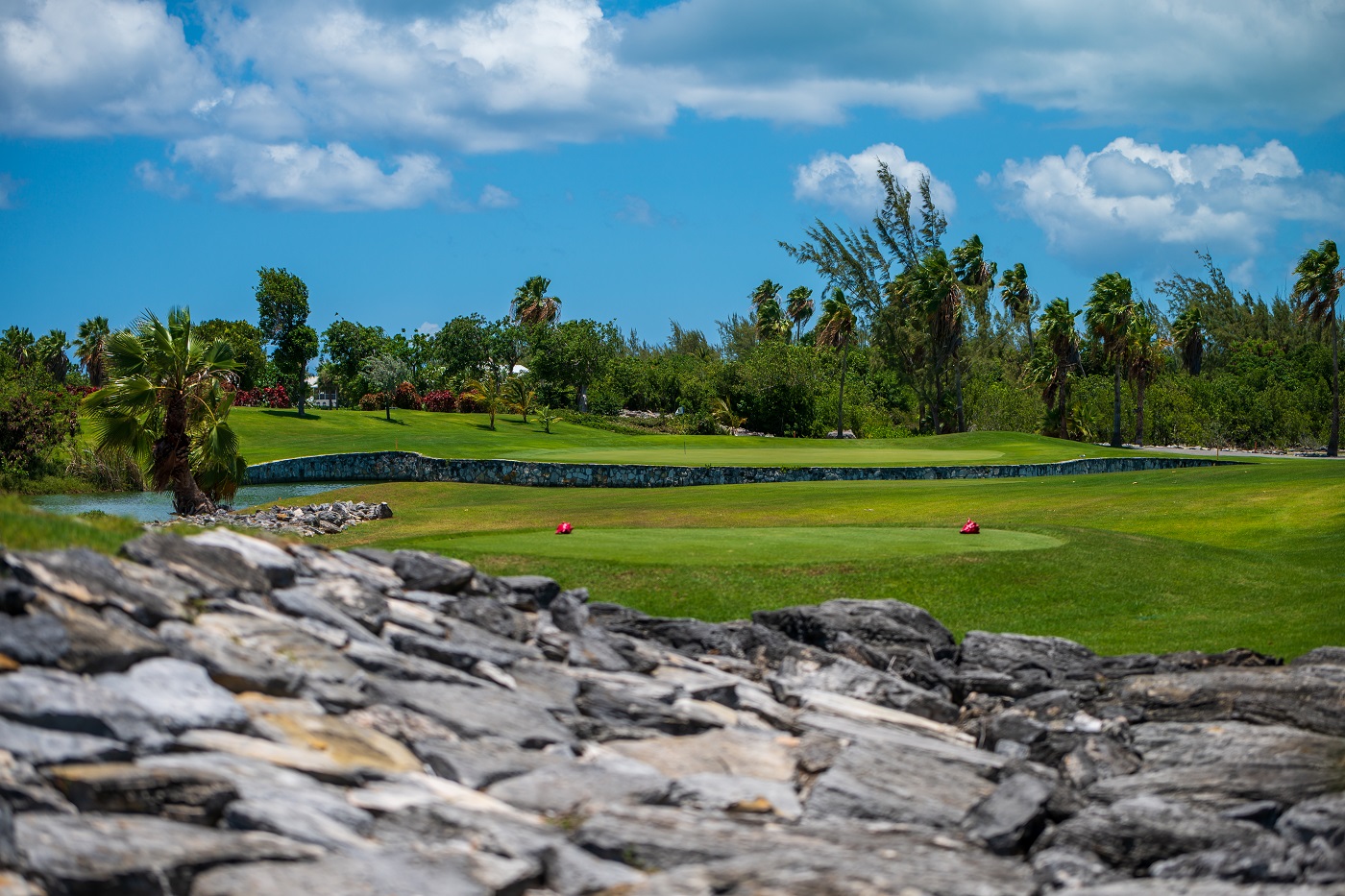 The 26th Annual Caribbean Golf Classic hosted by the Caribbean Golf Association at Casa de Campo Resort in La Romana, Dominican Republic had a total of 237 Golfers participating. The team from Turks & Caicos had 41 Golfers entered with 35 players in the Men’s Divisions and 6 players in the Ladies Divisions. A total contingent of 56 people from Turks & Caicos attended to enjoy the experience. We want to congratulate Ernest Gardiner who has played in the event for the 26th time having never missed participating in a Caribbean Classic since its inception.

The Format was Stableford Competition over 3 rounds (1 Round on each course – Teeth of the Dog which is rated # 32 best golf course in the world, Dye 4 Course and The Links Course). In the individual results Team TCI had 2 players win trophies with Jarrett Forbes finishing in 2nd place in the Men’s 6th Flight (tied for 1st but placed 2nd via tiebreaker) and Emer O’Sullivan in 2nd place in the Ladies 3rd Flight.

The Team Event saw the Turks & Caicos finish 3rd Place overall behind Team’s from Puerto Rico & the U.S.A. In the Men’s Event the TCI finished in 4th place and 5th place in the Ladies Event. Another great result as a country in an International Competition particularly when you consider our size.

The 27th Annual Caribbean Classic will take place in the spring of 2023 and details will be available shortly for this social competition. Hopefully Team TCI will keep the momentum intact with a larger showing and continued great results in 2023!

Thursday kicked the tournament off with the Calcutta at Simone’s Bar & Grill where captains entered a friendly bidding war for rights of their respective vessels. Over the next two mornings fifteen boats set out from Leeward Cut in a mad dash to their favourite fishing spots. It was rough going both fishing days, but the excitement remained the same with the eventual fish auction offering the opportunity to purchase fresh Tuna, Mahi Mahi, and Wahoo at phenomenal prices. #19 Restaurant and Bar also got in on the act, purchasing a Wahoo for the restaurant.

The presentation ceremony followed, and the night featured the DJ playing all the favorites resulting in dancing, and tall fish tales about the “one that got away.”

Sunday afternoon’s Golf Tournament at Royal Turks & Caicos Golf Club was the highlight for all golf enthusiasts as an exciting round of 18-holes was framed with a perfect day of weather. The presentation ceremony followed with the top players awarded prizes ranging from trophies and golf bags to fine champagne or gift certificates. The traditional raffle draw took place with three amazing prizes up for grabs. A Breitling Endurance Pro watch (Jai’s), Dinner for 4 under the stars with complimentary wine (Bay Bistro), and Dinner for 4 Show/Buffet/Disco (Club Med).

Special recognition and thank you to Hon. Josephine Connelly who demonstrated her support at every event as well as a special thank you to the DECR for their assistance and significant reduction affecting tournament fees. Thanks to our host sponsors, namely Casablanca Casino, Cairsea Services Ltd., TCI Lotto, Carlisle Supply, Caicos Oil, ODMC, TCI Paint, NW Hamilton, Turtle Cove Marina & Royal Turks & Caicos Golf Club as well as to each additional sponsor whose unwavering generosity make the event successful each year. Prior to this year the WCGFT has donated $341,000 to various TCI youth-oriented charities with this year’s proceeds going to the Edward Gartland Youth Centre and Caribbean Tournament of Champions Basketball Tournament. Great job to all! 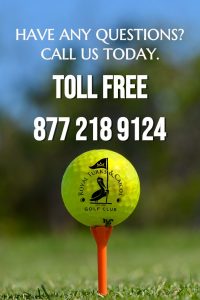