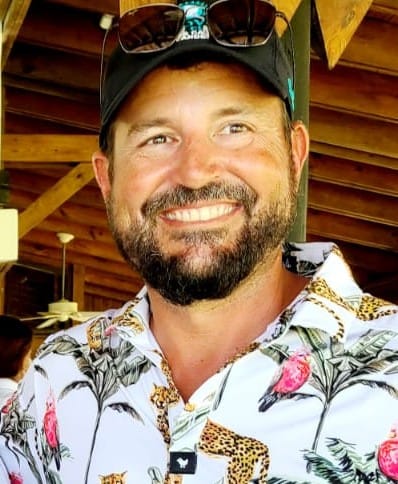 Tim grew up on the coast of North Carolina in Wilmington, which is where he acquired his passion for both golf and coastal living. From there, he attended college at NC State University, where he graduated with a Bachelor’s Degree in Agronomy with a Concentration in Turfgrass Mgmt. Then he continued to learn his trade as the Assistant Superintendent at Sedgefield C. C. and Starmount Forest C. C. in Greensboro, NC. At these facilities he gained valuable experience in tournament preparation by hosting a Nike Tour event and in course construction and grow-ins by being a part of a complete course renovation. In 2001, Tim obtained his first Superintendent job at Guyan Golf and Country Club in Huntington, WV. There he was able to hone his skills by hosting an annual NCAA tournament and completing numerous in-house and contracted course renovations.

Tim and his wife, Kristen, began travelling to the Caribbean in 1998, and continued to vacation at various islands as often as possible. The more they traveled, the more they fell in love with the culture, lifestyle, and obviously the climate. In 2010, they decided to chase their dream and accepted a position at Royal Turks and Caicos Golf Club. During his time here, he has been a part of a lot of exciting and positive changes that have taken place on the property, none more rewarding than the turf renovation that him and his crew completed in 2017 & 18. Tim and Kristen have spent over a quarter of their lives in Providenciales now and suffice to say they are incredibly happy with that 2010 decision.

GCSAA Class A Superintendent since 2003